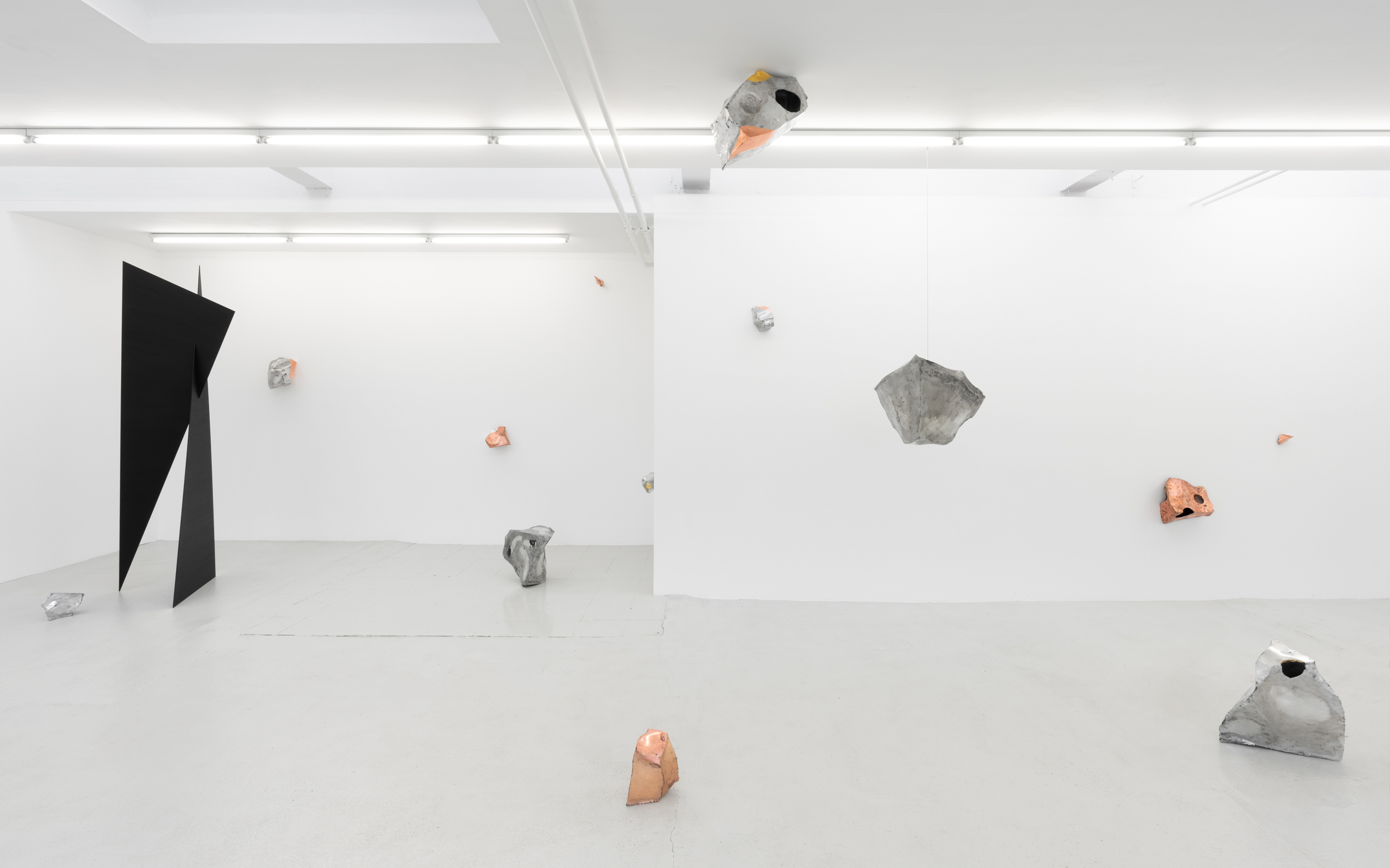 In a split second, gravity has been eliminated. A swarm of stone-like sculptures float with metallic shimmer throughout the exhibition space and sends one in orbit along with the stone rubble.

Amalie Jakobsen creates works with elegant precision that define the exhibition space by creating a carefully organized choreography for our ways of moving and understanding space. In the exhibition Fool’s Gold, the artist’s second solo exhibition at Gether Contemporary, the space is revealed anew. The sculptures are abstractions of asteroids, fragmented celestial bodies traveling in their fixed orbit around the stars. Two black rigid geometrical sculptures, which serve as poles in the room suck the stones into orbit. Jakobsen expands our perception of space from the concrete architecture we inhabit daily and pushes outer space into our world view forcing us to confront it.

The universe has always been the object of mankind’s wildest dreams from the pioneering astronomer Tycho Brahe over NASA Apollo missions to near future outer space tourism. Currently, there is a focus on developing mines at asteroid belts near Earth as our planet’s resources are limited and cannot facilitate our constant increasing demand for expansion. This type of asteroid mining is both an expression of a growing technological development that many hope will save us from the climate crisis and simultaneously a run on precious metals which has already created an extensive pollution crisis in Brazil, China and Malaysia and maybe soon in outer space.

The sculptures are akin to advanced typography where uneven bumpy surfaces disappear into the outlines of an otherworldly landscape. Just as tectonic plates the aluminum has been moved, pushed, collided with other plates. The sculptures are also beautiful and enticing as the pyrite or Fool’s Gold indicates in the exhibition title. The surface shimmers of copper and gold to silver and platinum.

Amalie Jakobsen’s silent asteroid storm in Gether Contemporary’s bright gallery space is far from an attempt to illustrate a human conquering of the wealth of the universe. The sculptures are rather investigation of the physical and bodily labor of crafting as an attempt to understand what the future will bring. In the sculptures, one can sense a frustration over the world’s current condition, that stems from stones hollowed-out interiors as well as the tireless hammering and knocking that has settled into the surface of the sculptures providing their form.