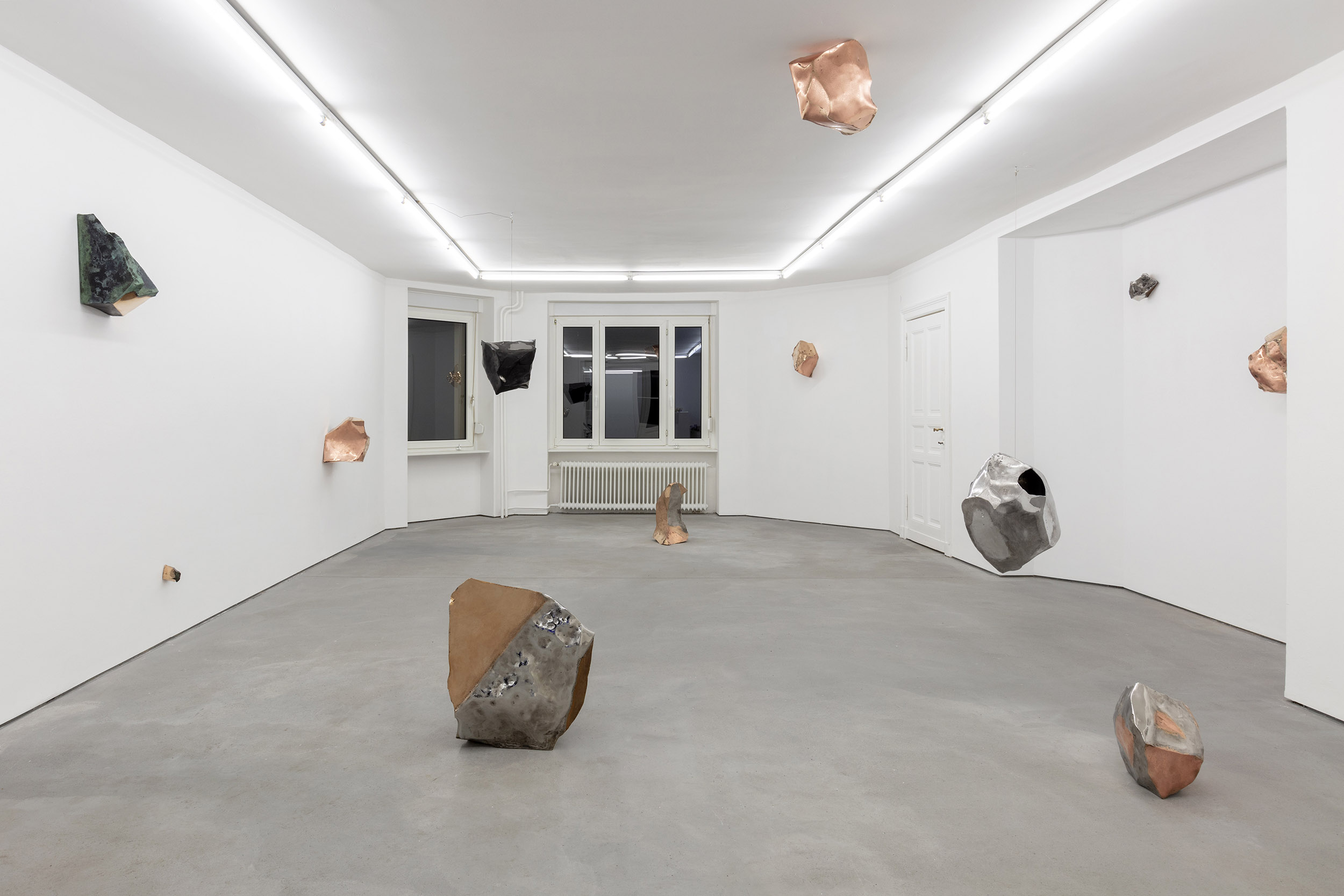 Future Gallery is pleased to present Orbital Harvest an exhibition of new sculptures and installations by Danish-artist Amalie Jakobsen. The exhibition consists of twenty metal asteroid sheaths installed in seemingly zero gravity throughout the gallery as well as two large scale hand painted aluminum elliptical sculptures. In the context of the exhibition, Osculating Orbits (lII), 2021, a mirror polished stainless steel sculpture is installed in the front garden of the gallery and will be on view through August 15, 2021.

In their search for markers identifying the emergence of the Anthropocene, the so-called ‘geologic age of Man’, geologists have recognized a new class of objects they refer to as ‘technofossils’. Technofossils are synthetic objects produced by technological intervention that appear within the geologic record, where some will continue to reside long after humans have ceased to exist. They can take many forms, from everyday plastic objects, metal alloys, novel chemical compounds and radioactive materials generated in the production of energy and armaments. Whilst these technofossils have thus far been identified in terrestrial environments they can be found far beyond the boundaries of the Earth’s atmosphere. The teaming cluster of satellites and industrial debris orbiting the planet, and the expanding human footprint on the Moon, can arguably be understood as ‘technofossils’ that mark the extension of the Anthropocene into outer space. Further the technological objects that litter the surface of Mars, Venus, as well as various other planetary moons, asteroids and comets – nevermind the uncertain destiny of NASA’s two Voyager probes now hurtling through interstellar space – indicate that these extra-planetary technofossils are not confined to the Earth’s orbit. Their presence reveals that human activity has already etched its mark into the geological records of alien worlds.

Over the last decade there has been a rapid reorientation of attitudes around the human presence in outer space amongst global power brokers, one that might best be characterized as a shift from space exploration to space exploitation. A concerted effort is underway to transform the final installation view: Amalie Jakobsen Orbital Harvest, Future Gallery, Berlin, 2021

frontier into a free market frontier; an effort that involves billionaire industrialists, powerful nation states, international space programs, a multitude of start-ups, global investment banks, libertarian lobby groups, an excitable business press and the odd useful idiot on the social media Left. The conjuring of outer space into a zone of commercial potential raises profound political-economic, environmental and ethical questions about the future of life on Earth as well as off. The nature, scope and stakes of private and public actors’ interests in the commercial exploitation of outer space requires much wider debate and greater critical scrutiny than it is currently afforded.

The project of developing markets for ‘space resources’, particularly the large quantities of rare minerals understood to exist in asteroids, is no longer the preserve of sci-fi fanatics but is the work of policy markers and angel investors. Not only have a number of businesses established themselves in the, as yet speculative, space mining sector but more importantly states, notably the United States and Luxembourg, have created domestic legal architectures to recognize materials extracted in outer space as private property. Although space mining remains technically and financially unfeasible for the moment this may not be the case for long. An increasing number of missions carried out by national space programs, including the sampling of asteroid probes and Martian landers, can be seen in effect as R&D trials for commercial extraction. There is an urgent need to challenge head on these efforts to expand familiar patterns of capitalist accumulation and geopolitical competition into the solar system.
Amalie Jakobsen’s latest show at Future Gallery foregrounds important questions about the future of human activity in outer space by fabricating speculative technofossils in the form of sculptural remnants from future asteroid mining. Her sculptures, which evoke the metallic husks of astral worlds stripped of desired elements, confront the viewer with the environmental consequences of expanding extractive economies into outer space, whilst exposing the embeddedness of our own social conditions, including those that structure the art system, within the planetary-scale extractive regime of global capitalism. The exhibition creates a space of contemplation for grappling with the histories and futures of capitalist resource extraction and our current dependency upon environmentally destructive modes of resource management.

Jakobsen’s show occupies the gallery space like a ravaged cross-section of the asteroid belt, evoking the exhausted wastescapes left in the wake of an extra-planetary mining operation. The main room prefigures the celestial sacrifice zones left in the aftermath of a future ‘space resource’ frontier, within which the sculptures appear suspended in a contorted temporality, at once portents of a great cosmic plunder to come and the shattered remains left behind. These gleaming, tarnished bodies inhabit an uncanny spectral materiality, simultaneously after and not yet: the technofossil overburden of a still avoidable civilizational horizon. In bearing the traces of violent labour the individual sculptural works, forged in copper, bronze and steel, draw the distant damage wrought by mineral extraction and the work of artistic production into a discomforting metallurgic proximity. Just as an earlier generation of artists found the sites and materials of post-industrial urban decay and capital flight to be fertile grounds for artistic production, Jakobsen has rendered Future Gallery into a prospective post-industrial landscape and invites those entering into the space to consider the murky complicity between art and extraction.

Splayed out across the volume of the gallery space this belt of sculptural relics transmits something of a memorial, or an anti-monument, marking the devastation left by capitalism’s boundless thirst for accumulation. By invested her sculptures with the mournful quality of bodies abandoned after use Jakobsen ensures that they do not simply inhabit the space as the mangled dross of future extraction but are affirmed with an integrity that exceeds their position as ‘surplus’ to capitalist circulation. In questioning the status of these jettisoned alien crusts Jakobsen evokes the troubled condition of art works and natural resources alike, which exist both as commodities within capitalist markets and ‘objects’ with an autonomous existence and meaning within other modalities of value.

In a second space stand two large sculptures, constructed from laser cut aluminum, that sit somewhere proximate to scientific models in their concise fusion of figuration and abstraction. Here the delirious orbits of space debris are cast as elliptical planes encircling vertical limbs. Despite the luster of their finish these elegant metallic forms are imbued with a certain melancholy. They haunt the space with the memory of Vladimir Tatlin’s unbuilt Monument to the Third International, that emblem of Modernity’s unfulfilled social promise and its imagined but unrealized futures. Jakobsen’s sculptures here give pause for reflection on the lapsed promise of modernist futures and the social and environmental ‘externalities’ baked into them. These diagrammatic aluminum totems counsel against the rush to make modernity great again with an infusion of resources harvested in space. Like sentinels guarding against capitalism’s drive to find an outer-spatial fix in a final, free- market frontier for the very planetary environmental crisis it has provoked, they hold out the prospect of a relationship to outer space not governed by familiar lethal compulsions.

Amalie Jakobsen (b. 1989 Copenhagen) lives and works in Berlin. Jakobsen graduated with a BA in Fine Art from Goldsmiths University of London in 2014. Recent exhibitions include Gallery Brandstrup in Oslo and Gether Contemporary in Copenhagen. Upcoming solo exhibitions at Art Museum Gl. Strand in Copenhagen. Her work is included in Public collections such as Arken Modern Art Museum, the Carlsberg Foundation, and The Danish Arts Foundation, Copenhagen, Denmark.